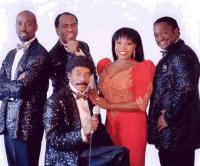 The Platters are a doo-wop vocal group which was formed in 1953 at the beginning of the early rock and roll era.
Their distinctive sound created by Buck Ram was a bridge between the pre-rock Tin Pan Alley tradition, and the burgeoning new genre.
The original group members were Alex Hodge, Cornell Gunther, David Lynch, Joe Jefferson, Gaynel Hodge and Herb Reed. In 1970, when all original members had left, the name of the group was changed to The Buck Ram Platters.
After signing with Buck Ram, the act went through several personnel changes before hitting the charts, with the most successful incarnation comprising lead tenor Tony Williams, David Lynch, Paul Robi, Herb Reed, and Zola Taylor.
The Platters formed in Los Angeles in 1953 and were initially managed by Ralph Bass.
The group had a contract with Federal Records but had found little success before meeting music entrepreneur and songwriter Buck Ram.
The band recorded a series of singles backing Linda Hayes before Ram made some changes to the lineup, most notably the addition of lead vocalist Tony Williams (Linda Hayes’ brother) and female vocalist Zola Taylor.
Under Ram’s guidance, the Platters recorded seven singles for Federal in the R&B/gospel style, scoring a few minor regional hits on the West Coast.
One song recorded during their Federal tenure, ˝Only You (And You Alone)˝, originally written by Ram for the Ink Spots was deemed unreleasable by the label.[1]
Despite their lack of chart success, the Platters were a profitable touring group—successful enough that The Penguins, coming off their #2 single ˝Earth Angel˝, asked Ram to manage them as well.
With the Penguins in hand, Ram was able to parlay Mercury Records’ interest into a 2-for-1 deal.
To sign the Penguins, Ram insisted, Mercury also had to take the Platters. Ironically, the Penguins would never have a hit for the label.
The Platters name has appeared on a Las Vegas marquee longer than that of any other act beginning in 1955 when they opened the Moulin Rouge moved to the Flamingo for two weeks and went back to close the Moulin Rouge.
They opened the Maxim, did sixteen weeks a year at the Four Queens for ten years, and played most other major properties including the International before the name was changed to The Las Vegas Hilton. In 1994 Jean Bennett licensed the name to a tribute group for a show at the Sahara. That show ran for 15 years. 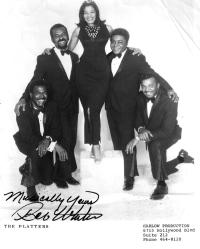 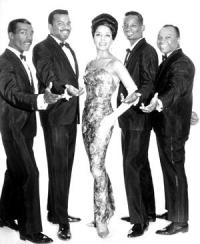 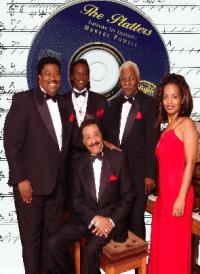 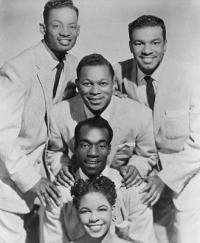 PLATTERS the
Santa is coming to town with The Platters / The Platters. -
Oud-Beijrland : Weton-Wesgram, 2006. -
(Xmas Stars)
78 PLATTE san