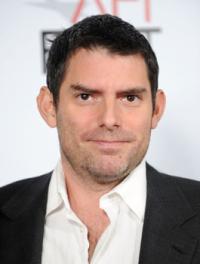 Christopher John ˝Chris˝ Weitz (born November 30, 1969) is an American producer, writer, director and actor.
He is best known for his work with his brother, Paul Weitz, on the comedy films American Pie and About a Boy, as well as directing the film adaptation of the novel The Golden Compass and the film adaptation of New Moon from the series of Twilight books.
His most recent film is A Better Life.
Weitz was born in New York City, New York, the son of actress Susan Kohner and Berlin-born novelist/fashion designer John Weitz (born Hans Werner Weitz).
His brother is filmmaker Paul Weitz.
He is the grandson of Bohemia-born producer Paul Kohner and Mexican actress Lupita Tovar on his maternal side.
His grandmother, Lupita, starred in Santa, Mexico’s first talkie, in 1932.

Weitz’s father and maternal grandfather were Jewish, and his maternal grandmother was Catholic; he was raised in a ˝nonreligious˝ household.
He has also described himself as a ˝lapsed Catholic crypto-Buddhist˝.
Weitz was educated at St Paul’s School in London and went on to graduate with an English degree from Trinity College in Cambridge.
He is married to Mercedes Martinez, who is Cuban Mexican, with whom he has one son, Sebastian
....