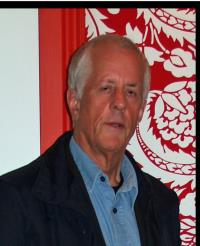 Michael David Apted, CMG (born 10 February 1941) is an English director, producer, writer and actor.
He is one of the most prolific British film directors of his generation, and directed the Up Series (1964–) of documentaries and the James Bond film The World Is Not Enough (1999).

On 29 June 2003 he was elected president of the Directors Guild of America.
He returned to television, directing the first three episodes of the TV series Rome (2005).
Apted directed Amazing Grace which premiered at the closing of the Toronto International Film Festival in 2006.
He was appointed a Companion of the Order of St Michael and St George (CMG) in the 2008 Birthday Honours.

Apted was born to a middle-class family in Aylesbury, Buckinghamshire, the son of Frances Amelia (née Thomas) and Ronald William Apted, who worked for an insurance company.
Michael Apted secured a scholarship to attend City of London School and then to study law and history at Downing College, Cambridge.

Michael Apted married Paige Simpson, his third wife, in January 2014.
Apted is divorced from his second wife, the screenwriter Dana Stevens, with whom he has a 12-year-old son, John.
From his first marriage to Jo Apted he had two sons, Paul and Jim.
Paul Apted was a sound editor who worked on movies such as The Wolverine, and died on 4 July 2014 from colon cancer.
In 2007 Apted become a father for the fourth time to a girl, Lily Mellis, who lives with her mother Tania Mellis in California.