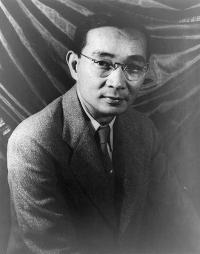 Lin Yutang (October 10, 1895 – March 26, 1976) was a Chinese writer and inventor.
His informal but polished style in both Chinese and English made him one of the most influential writers of his generation, and his compilations and translations of classic Chinese texts into English were bestsellers in the West.

Lin studied for his bachelor’s degree at Saint John’s University in Shanghai, then received a half-scholarship to continue study for a doctoral degree at Harvard University.
He later wrote that in the Widener Library he first found himself and first came alive, but he never saw a Harvard-Yale game.
He left Harvard early however, moving to France and eventually to Germany, where he completed his requirements for a doctoral degree (in Chinese) at the University of Leipzig.
From 1923 to 1926 he taught English literature at Peking University. On his return to the United States in 1931, he was briefly detained for inspection at Ellis Island.

On Lin’s return to China, he briefly served in the new Nationalist government, but soon turned to teaching and writing.
He found himself in the wake of the New Culture Movement which criticized China’s tradition as feudal and harmful.
Instead of accepting this charge, however, Lin immersed himself in the Confucian texts and literary culture which his Christian upbringing and English language education had denied him.
He maintained friendship and debate with Hu Shi, Lu Xun, and Zhou Zuoren, key figures in the Shanghai literary scene of the 1930s.
He was a key figure in founding journals and introducing the Western concept of humor, which he felt China had lacked. His writings in Chinese were critical of the Nationalist government, to the point that he feared for his life.
Many of his essays from this time were later collected in With Love and Irony (1940)
...