Stephen Gaghan (born May 6, 1965) is an American screenwriter and director.
He is noted for writing the screenplay for Steven Soderbergh’s film Traffic, based on a Channel 4 series, for which he won the Academy Award, as well as Syriana which he wrote and directed.
Gaghan wrote the screenplay for Traffic, for which he won an Academy Award for Best Adapted Screenplay in 2000.
In addition to Traffic, Gaghan has also directed and written the screenplays for Syriana (2005) and Abandon (2002), the former receiving comparable critical acclaim to Traffic, while the latter turned out to be a total fiasco.
Other writing credits include Havoc (2005), The Alamo (2004) and Rules of Engagement (2000), as well as a handful of episodes of various television series.
Gaghan turned down the chance to adapt Dan Brown’s novel, The Da Vinci Code.

In his television writing career, he won an Emmy Award for co-writing a NYPD Blue episode entitled Where’s Swaldo, in 1997.
In addition to NYPD Blue, he has also written for The Practice and New York Undercover.
As a filmmaker, Gaghan is generally regarded as one of the two precursors of the style known as hyperlink cinema, along with the Alejandro González Inarritu/Guillermo Arriaga writer-director team of Amores Perros, 21 Grams and Babel.
Most especially, Syriana’s convoluted narrative, which mimics the confusion and lack of information of the characters yet manages to capture the complexity and feel of being in its particular milieu, is considered a prime example of the hyperlink film.
Gaghan played himself in the Entourage season 4 premiere ˝Welcome to the Jungle˝.

His next project is a film adaptation of Malcolm Gladwell’s book, Blink: The Power of Thinking Without Thinking.
He has also been hired by Warner Bros. to write the screenplay of the Dead Spy Running franchise written by author Jon Stock 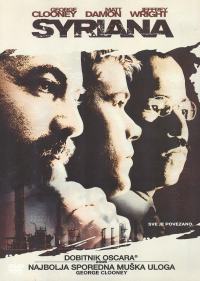