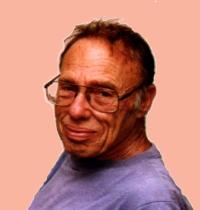 Robert Sheckley (July 16, 1928 – December 9, 2005) was a Hugo- and Nebula-nominated American author.
First published in the science fiction magazines of the 1950s, his numerous quick-witted stories and novels were famously unpredictable, absurdist and broadly comical.

Sheckley was named Author Emeritus by the Science Fiction and Fantasy Writers of America in 2001.

Robert Sheckley was born to an assimilated Jewish family in Brooklyn, New York.
In 1931 the family moved to Maplewood, New Jersey.
Sheckley attended Columbia High School, where he discovered science fiction.
He graduated in 1946 and hitchhiked to California the same year, where he tried numerous jobs: landscape gardener, pretzel salesman, barman, milkman, warehouseman, and general laborer ˝board man˝ in a hand-painted necktie studio.
Finally, still in 1946, he joined the U.S.
Army and was sent to Korea.
During his time in the army he served as a guard, an army newspaper editor, a payroll clerk and guitarist in an army band.
He left the service in 1948.

Sheckley then attended New York University, where he received an undergraduate degree in 1951.
The same year he married for the first time, to Barbara Scadron.
The couple had one son, Jason.
Sheckley worked in an aircraft factory and as an assistant metallurgist for a short time, but his breakthrough came quickly: in late 1951 he sold his first story, Final Examination, to Imagination magazine.
He quickly gained prominence as a writer, publishing stories in Imagination, Galaxy, and other science fiction magazines.
The 1950s saw the publication of Sheckley’s first four books: short story collections Untouched by Human Hands (Ballantine, 1954), Citizen in Space (1955), and Pilgrimage to Earth (Bantam, 1957), and a novel, Immortality, Inc. (first published as a serial in Galaxy, 1958).

Sheckley and Scadron divorced in 1956.
The writer married journalist Ziva Kwitney in 1957.
The newly married couple lived in Greenwich Village.
Their daughter, Alisa Kwitney, born in 1964, would herself become a successful writer.
Applauded by critic Kingsley Amis, Sheckley was now selling many of his deft, satiric stories to mainstream magazines such as Playboy.
In addition to his science fiction stories, in 1960s Sheckley started writing suspense fiction.
More short story collections and novels appeared in the 1960s, and a film adaptation of an early story by Sheckley, The 10th Victim, was released in 1965.

Sheckley spent much of 1970s living on Ibiza.
He and Kwitney divorced in 1972 and the same year Sheckley married Abby Schulman, whom he had met in Ibiza.
The couple had two children, Anya and Jed.
The couple separated while living in London.
In 1980, the writer returned to the United States and became fiction editor of the newly established OMNI magazine.
Sheckley left OMNI in 1981 with his fourth wife, writer Jay Rothbell a.k.a.
Jay Sheckley, and they subsequently traveled widely in Europe, finally ending up in Portland, Oregon, where they separated.
He married Gail Dana of Portland in 1990.
Sheckley continued publishing further science fiction and espionage/mystery stories, and collaborated with other writers such as Roger Zelazny and Harry Harrison.

During a 2005 visit to Ukraine for the Ukrainian Sci-Fi Computer Week, an international event for science fiction writers, Sheckley fell ill and had to be hospitalized in Kiev on April 27.
His condition was very serious for one week, but he appeared to be slowly recovering.
Sheckley’s official website ran a fundraising campaign to help cover Sheckley’s treatment and his return to the United States.
Sheckley settled in Red Hook, in northern Dutchess County, New York, to be near his daughters Anya and Alisa.
On November 20 he had surgery for a brain aneurysm; he died in a Poughkeepsie hospital on December 9, 2005. 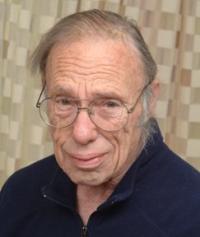 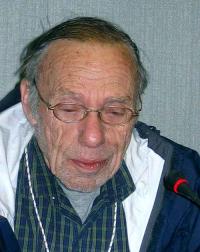