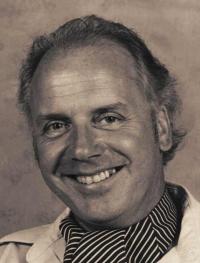 Michael Greatrex Coney (September 28, 1932 - November 4, 2005) was a British science fiction writer who spent the later half of his life in Canada.
Born in Birmingham, England on September 28, 1932, he moved to Victoria, British Columbia in 1972.
He died at the age 73 of pleural mesothelioma, a cancer of the lining of the lungs, on November 4, 2005 at the Saanich Peninsula Hospital palliative care unit.

Settings and themes of Coney’s books vary between the different novels.
A common element is that you follow rather ordinary people who are buffeted by forces beyond their strength, and mostly not much concerned with them.
Most SF gives the superior powers to the leading characters, or has them acquire it during the course of the tale.
Coney avoided this, and cleverly satirised it in The Hero of Downways.

The stories do also tie in with the cultural concerns of the time:

His first novel, Mirror Image (1972), neatly intensified the American genre’s Cold War focus on impostors and secret invaders; in this case the ˝amorphs˝, who are indistinguishable from us, are themselves convinced that they are human.
After a first rush of dystopian tales, however, Coney began to shift his ground... his most successful later work - The Celestial Steam Locomotive and Gods of the Greataway - could almost be set on a transfigured Vancouver Island.
Another of Coney’s themes is small isolated communities - The Hero of Downways, Winter’s Children and Fang, the Gnome.
In Syzygy the inhabitants of a small town, a fairly recent settlement on an alien planet, struggle to survive the hidden dangers of the planet’s ecosystem; in Brontomek! the same characters a few years later face a wholly human threat from a multicorporate.
A different perspective is seen in ‘‘Hello Summer, Goodbye’’ - an adventure/mystery among people who are not quite human, on a planet rather like Earth, but with significant differences.
It is generally agreed to be his best novel and a particularly fine example of the coming-of-age genre.
I Remember Pallahaxi, a previously unpublished sequel to Hello Summer Goodbye, appeared posthumously in 2007.

Brontomek! received the British Science Fiction Association award for best novel of 1976.
He was nominated for a Nebula Award in 1995 for his novelette, Tea and Hamsters.

An interesting feature of his work is how few of his female characters are unsympathetic : even the intimidating Mrs.
Earnshaw, one of the dominating characters in Syzygy and Brontomek!, is essentially likeable.