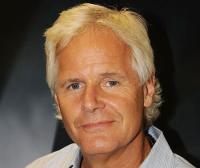 Chris Carter (born October 13, 1957) is a television and film producer, director and writer.
Born in Bellflower, California, Carter graduated with a degree in journalism from California State University before spending thirteen years working for Surfing Magazine.
After beginning his television career working on television films for Walt Disney Studios, Carter rose to fame in the early 1990s after creating the science fiction television series The X-Files for the Fox network.
The X-Files earned high viewership ratings, and led to Carter being able to negotiate the creation of future series.

Carter went on to create three more series for the network—Millennium, a doomsday-themed series which met with critical approval and low viewer numbers; Harsh Realm, which was canceled after three episodes had aired; and The Lone Gunmen, a spin-off of The X-Files which lasted for a single season.
Carter’s film roles include writing both of The X-Files’ cinematic spin-offs—1998’s successful The X-Files and the poorly received 2008 follow-up The X-Files: I Want to Believe, the latter of which he also directed—while his television credits have earned him several accolades including eight Primetime Emmy Award nominations.
Chris Carter was born on October 13, 1957 in Bellflower, California.
His father worked in the construction industry.
Carter has described his childhood as ˝fairly normal˝, and was fond of both Little League Baseball and surfing; his surfing stance is goofy footed.
He attended California State University in Long Beach, graduated with a journalism degree in 1979.
An avid surfer, he began writing for Surfing Magazine, a San Clemente-based journal, eventually becoming its editor at the age of 28.
Carter would work for the magazine for thirteen years, and credits his tenure there for teaching him how to run a business.
It was also at this time that Carter began taking an interest in pottery, making ˝hundreds of thousands of pieces˝ of dinnerware as a hobby.
He has compared the process of making pottery to Zen meditations, although he has since thrown out most of his work