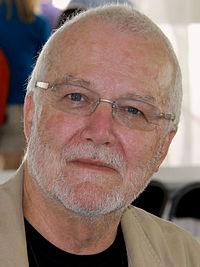 Russell Banks (born March 28, 1940) is an American writer of fiction and poetry.

Russell Banks was born in Newton, Massachusetts on March 28, 1940. He attended the University of North Carolina at Chapel Hill.
He lives in upstate New York, and has been named a New York State Author.
He is also Artist-in-Residence at the University of Maryland. He is married to the poet Chase Twichell. Banks is an American novelist best known for his “detailed accounts of domestic strife and the daily struggles of ordinary often-marginalized characters”.
His stories usually revolve around his own childhood experiences, the often reflect “moral themes and personal relationships”.

Banks is a member of the International Parliament of Writers and a member of the American Academy of Arts and Letters. His work has been translated into twenty languages and has received numerous international prizes and awards. He has written fiction, and more recently, non-fiction, with Dreaming up America. His main works include the novels Continental Drift, Rule of the Bone, Cloudsplitter, The Sweet Hereafter, and Affliction. The latter two novels were each made into feature films in 1997 (see The Sweet Hereafter and Affliction).

Many of Banks’s works reflect his working-class upbringing. His stories often show people facing tragedy and downturns in everyday life, expressing sadness and self-doubt, but also showing resilience and strength in the face of their difficulties. Banks has also written short stories, some of which appear in the collection The Angel on the Roof, as well as poetry. He has written a movie adaptation of Jack Kerouac’s On the Road for producer Francis Ford Coppola, which was slated for production in 2006.
It is not known if Banks’s screenplay will be used in the final version. Banks’s novel The Darling is going to be made into a feature film directed by Martin Scorsese, with Cate Blanchett in the main role.
Banks was the 1985 recipient of the John Dos Passos Prize for fiction. Cloudsplitter was purported to have been a finalist for the Pulitzer Prize in fiction that eventually went to Michael Cunningham’s The Hours. He was elected a Fellow of the American Academy of Arts and Sciences in 1996