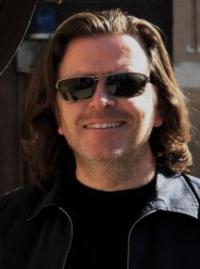 Simon West (born 1961) is an English film director.
West started as a film editor with the BBC, then directed documentaries and commercials including many for Budweiser.
His film directing career started when he directed Con Air in 1997.
Born in Letchworth, Hertfordshire, West began his career in 1981 when he became a film editor with the BBC in London.
During a four-year tenure at the BBC, West was involved with a number of award-winning productions including the documentary series Strangeways Prison and the drama series Bleak House both of which won awards from the prestigious British Academy of Film and Television Arts.

West’s career took off in 1985 when he began freelancing as a director and he was awarded a grant from the Arts Council of Great Britain to write and direct the film entitled Dolly Mixtures.
He was subsequently signed to Limelight London to direct music videos and commercials.
In 1987 he won Best Video at the Montreux Music Festival for Mel and Kim’s Respectable.
He also directed the video for Rick Astley’s ˝Never Gonna Give You Up˝ in the same year.

West joined Propaganda Films in 1993 with a roster of credits including McDonalds, Sprite, AT&T, Ford, Miller Beer and Budweiser.
His most famous commercial was a spot for Pepsi where a little boy sucks himself into a Pepsi bottle.
The ad ran during the Super Bowl and was USA Today’s highest rated commercial for that year.