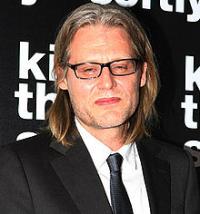 Andrew Dominik (born October 7, 1967) is a New Zealand-born Australian film director and screenwriter.
He has directed the films Chopper, The Assassination of Jesse James by the Coward Robert Ford and Killing Them Softly.
Dominik has lived in Australia since he was two years old and graduated from Melbourne’s Swinburne Film School in 1988.
His career in films began in 2000 when he directed Chopper based on notorious Australian criminal Mark Brandon ˝Chopper˝ Read, starring Eric Bana and Simon Lyndon.
Chopper received generally positive reviews, and Bana in particular was widely praised for his intense portrayal of Chopper.
The Australian Film Institute awarded the film with Best Director (Dominik), Best Actor (Bana), and Best Supporting Actor (Lyndon).

His next film was The Assassination of Jesse James by the Coward Robert Ford, starring Brad Pitt and Casey Affleck, based on the novel of the same name which he came across in a second-hand bookstore.
The film explores the peculiar relationship between Jesse James and his eventual assassin Robert Ford.
Pitt was a big fan of Dominik’s first feature Chopper, and had hoped to collaborate with the filmmaker in the future, especially when Pitt had the chance to work with Chopper star Eric Bana in Troy.
Pitt contacted the director, and with a big star interested to lead his new film, Dominik was therefore able to get Warner Bros. to finance the production.

Principal shooting in Canada was completed in 2005, though The Assassination’s 2006 release was delayed to a fall 2007 release, largely due to studio interference with the film’s editing process.
Dominik and Pitt were pulling for a less quick-paced and more contemplative cut of the film while the studio wanted ˝less contemplation and more action˝.
There were reportedly more than a dozen edited versions of the film at one time fighting to be the final cut, the longest version being over four hours.
The disputes during post-production lasted for over a year before a final version was settled upon.
Over an hour of scenes were deleted for the theatrical version, but Dominik remarked he was still very proud of the theatrical version of the film.
The film garnered two Academy Award nominations: Best Cinematography (Deakins) and Best Supporting Actor (Affleck).
Dominik reteamed with Brad Pitt in their second collaboration (after The Assassination of Jesse James) in a thriller/dark comedy based on George V.
Higgins’ Boston-set crime novel Cogan’s Trade.
The film was renamed Killing Them Softly.
Shooting began in January 2011 and wrapped in May 2011.
The film competed for the Palme d’Or at the 2012 Cannes Film Festival.and was released through the Weinstein Company.
In 2003, Paramount Pictures approached Dominik and offered him to direct an adaptation of Alfred Bester’s 1953 novel The Demolished Man, but as time passed, the project eventually became stuck in development hell when there were disagreements with the screenplay.

Dominik had also written an adapted screenplay for The Killer Inside Me, an acclaimed noir novel by Jim Thompson, and was at one point considered to direct it, but dropped out.
Michael Winterbottom eventually directed the film.