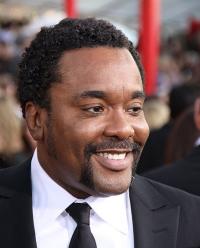 Lee Louis Daniels (born December 24, 1959) is an American actor, film producer, and director.
He produced Monster’s Ball and directed the film Precious: Based on the Novel ˝Push˝ by Sapphire, which received six Academy Award nominations, including Best Director; the film won two of the awards.
In 2013, Daniels directed The Butler, a historical fiction drama featuring an ensemble cast portraying unique events on the 20th century presidents of the United States at the White House.
The Butler received positive reviews and became a box office success.

Daniels was born on Christmas Eve, 1959, the son of Clara Watson and William L.
Daniels, in Philadelphia.
He graduated from upscale, suburban Radnor High School in 1978, and then Lindenwood University in St.
Charles, Missouri. He couldn’t afford film school, so he started in a liberal arts college in Missouri but realized it wasn’t for him, and started working as a receptionist in a nursing agency in California.
Realizing he could do it on his own, he quit the job and started his own agency.
At the age of 21, his company had 5000 nurses affiliated with it.
He sold the company and went to work casting actors using his skills from ’casting’ nurses.
Later, he realized he had not paid taxes on his income, but over time, he did pay them off.
He began his career in entertainment as a casting director and manager after a chance meeting with a Hollywood producer, working on such projects as Under the Cherry Moon and Purple Rain.
He continued managing talent.
The documentary My Big Break features Daniels early in his career when he was managing actor Wes Bentley who starred as Ricky Fitts in American Beauty.
In the documentary, a Daniels comments on Bentley’s reluctance to capitalize on his newfound celebrity status.

Lee has a sister, Joyce Daniels Fennell, both of them children of former Philadelphia police officer William Daniels, who was, as Daniels says, ˝killed in the line of duty˝ when Lee was a teenager, in 1975.
Daniels has also been very open about the fact that his father was violent and physically abusive towards him, and even tried ˝to beat it out of me.