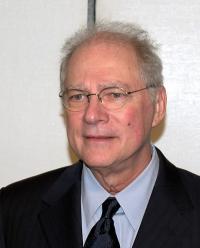 Barry Levinson (born April 6, 1942) is an American screenwriter, Academy Award-winning film director, actor, and producer of film and television.
His most notable works include acclaimed films such as the comedy-drama Diner (1982), the sports drama The Natural (1984), the war-comedy Good Morning, Vietnam (1987), the crime drama Bugsy (1991), and the political black comedy Wag the Dog (1997).
He won the Academy Award for Best Director for his work on the drama Rain Man (1988), which also won the Academy Award for Best Picture.
Levinson was born in Baltimore, Maryland, the son of Violet ˝Vi˝ (née Krichinsky) and Irvin Levinson, who worked in the furniture and appliance business.
His family was of Russian Jewish descent
...