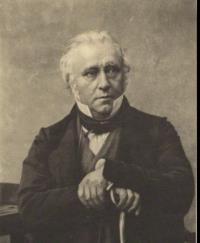 Thomas Babington Macaulay, 1st Baron Macaulay, PC (25 October 1800 – 28 December 1859) was a British historian and Whig politician.
He wrote extensively as an essayist and reviewer; his books on British history have been hailed as literary masterpieces.
Macaulay held political office as the Secretary at War between 1839 and 1841, and the Paymaster-General between 1846 and 1848.
He played a major role in introducing English and western concepts to education in India, publishing his argument on the subject in the ˝Macaulay Minute˝ published in 1835.
He supported the replacement of Persian by English as the official language, the use of English as the medium of instruction in all schools, and the training of English-speaking Indians as teachers.

In his view, Macaulay divided the world into civilised nations and barbarism, with Britain representing the high point of civilisation.
In his Minute on Indian Education of February 1835, he asserted, ˝It is, I believe, no exaggeration to say that all the historical information which has been collected from all the books written in the Sanskrit language is less valuable than what may be found in the most paltry abridgement used at preparatory schools in England˝.
He was wedded to the Idea of Progress, especially in terms of the liberal freedoms.
He opposed radicalism while idealising historic British culture and traditions