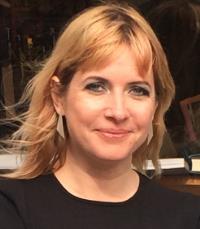 Lauren Beukes was born 5 June 1976.
She grew up in Johannesburg, South Africa.
She has an MA in Creative Writing from the University of Cape Town.
She worked as a freelance journalist for ten years, including two years in New York and Chicago.

She is the author of The Shining Girls, a novel about a time-traveling serial-killer and the survivor who turns the hunt around.
It was published on 15 April 2013 by the Umuzi imprint of Random House Struik in South Africa, on 25 April 2013 by HarperCollins in the United Kingdom, and on 4 June 2013 by Mulholland Books in the United States. HarperCollins had won the international rights to the book in a fierce bidding war with several other publishers.
The Shining Girls won The Strand Magazine Critic’s Best Novel Award, the RT Thriller of the Year,
Exclusive Books’ Readers Choice Award, and South Africa’s most prestigious literary award, The University of Johannesburg Prize.
The TV rights for the novel have been acquired by MRC and Leonardo DiCaprio’s Appian Way according to The Hollywood Reporter.

Her previous novel, Zoo City, a hardboiled thriller about crime, magic, the music industry, refugees and redemption set in a re-imagined Johannesburg won the 2011 Arthur C.
Clarke Award, and the 2010 Kitschies Red Tentacle for best novel.
It was short-listed for the 2010 BSFA Award for best novel, the 2011 World Fantasy award for best novel, the 2010–2011 University of Johannesburg Creative Writing Prize, the M-Net Literary Awards, the Nielsen’s Booksellers’ Choice Award 2011 and long-listed for South Africa’s Sunday Times Fiction Prize 2011 and the 2012 IMPAC Dublin Literary Award.
The cover artwork received the 2010 BSFA award for best art.
The novel has also been short-listed for the Grand Prix de l’Imaginaire in France for best foreign novel, best translation by Laurent Philibert-Caillat and best cover by Joey Hi-Fi.

The film rights have been optioned by South African producer, Helena Spring.

Her first novel was Moxyland, a cyberpunk novel set in a future Cape Town.
Both books were first published in South Africa by Jacana Publishing and released internationally by Osprey Publishing’s Angry Robot imprint.

Her first book, the non-fiction Maverick: Extraordinary Women From South Africa’s Past (Oshun 2005) was long-listed for the 2006 Sunday Times Alan Paton Award.

In July 2014, Beukes published a new a novel called Broken Monsters, which is set in Detroit, Michigan.