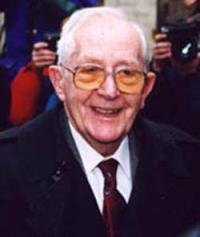 Lewis Gilbert was born in Hackney, London on 6 March 1920 as the son to a second-generation family of music hall performers, and spent his early years travelling with his parents, and watching the shows from the side of the stage.
He first performed on-stage at the age of 5, when asked to drive a trick car around the stage.
This pleased the audience, so this became the end of his parents’ act.
When travelling on trains, his parents frequently hid him in the luggage rack, to avoid paying a fare for him.
His father contracted tuberculosis when he was a young man.
He died aged 34, when Gilbert was seven.
As a child actor in films in the 1920s and 1930s, he was the breadwinner for his family, his mother was a film extra, and he had an erratic formal education.
In 1933, at the age of 13, he had a role in Victor Hanbury’s and John Stafford’s Dick Turpin, and at age 17 a small uncredited role in The Divorce of Lady X (1938) opposite Laurence Olivier.
Alexander Korda offered to send him to RADA, but Gilbert chose to study direction instead, notably as an assistant on Alfred Hitchcock’s Jamaica Inn (1939).

When the Second World War started, he joined the Royal Air Force’s film unit, where he worked on various documentary films.
He was eventually seconded to the U.S.
Air Corp film unit, where his commanding officer was William Keighley, an American film director, who allowed Gilbert to take on much of his film-making work.

After the war, he continued to write and direct documentary shorts for Gaumont British, before entering low budget feature film production.
Gilbert made his name as a director in the 1950s and 1960s with a series of successful films, often working as the film’s writer and producer as well.
These films were often based on true stories from the Second World War.
Examples include Reach for the Sky (1956) (based on the life of air ace Douglas Bader), Carve Her Name with Pride (1958) (the story of SOE agent Violette Szabo) and Sink the Bismarck! (1960).