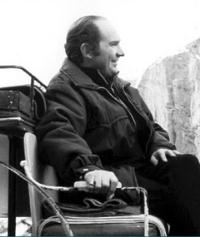 Born in London, England, Hunt had an uncle in the film industry who was able to find him work on some films, cutting as an assistant editor under Alexander Korda. He enlisted in the British Army at 17 with the goal of working with the British Army Film unit but became an infantryman landing at Salerno and fighting at Monte Cassino. Leaving the Army as a Staff Sergeant in 1947, he studied art at the University of Rome then returned to England where he found work as a clapper boy at Denham Studios.

Hunt was an assembling editor on The Man Who Watched Trains Go By in 1952 then began work as an editor on Stranger From Venus (1954).

He gained recognition for his film editing techniques when he utilized quick cutting, allowing camera swings during action and inserts interleaving other elements while working as editor on the first three Bonds.

Hunt then acted as second unit or action unit director until his directorial debut, the sixth James Bond film, On Her Majesty’s Secret Service. He also worked with Harry Saltzman and Albert R. Broccoli on the 1963 Bob Hope film Call Me Bwana, and with Saltzman and a few other Bond veterans on the non-EON thriller The IPCRESS File. Call Me Bwana is the only film produced by the James Bond production company Eon Productions that is not a Bond film. Hunt also directed some episodes of the 1971 British television series, The Persuaders!, which starred future James Bond Roger Moore, and Tony Curtis.

On 14 August 2002, Hunt died of heart failure at his home in Santa Monica, California at the age of 77