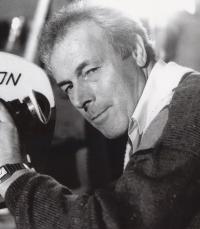 John Glen (born 15 May 1932) is an English film director, film editor, and author.
He is best known for his directorial and editing work on eight James Bond films from the 1960s to the 1980s.
Glen had his start in the film-making industry as a messenger boy in 1945.
By the late 1940s, he was working in the visual and sound editorial departments of Shepperton Studios for films produced by Alexander Korda, such as The Third Man (1949) and The Wooden Horse (1950).
Moving up the ranks, Glen made his picture editorial debut on a documentary series titled Chemistry for Six Forms in 1961, and his directorial debut on the TV series Man in a Suitcase in 1968 (directing the episode ˝Somebody Loses, Somebody ...
Wins?˝).

After Bond, Glen continued to direct, with credits including Christopher Columbus: The Discovery (1992) and The Point Men (2001).
He also directed episodes of the science-fiction television series Space Precinct (1994–95).
In 2001, he published his memoir, For My Eyes Only.