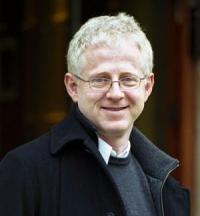 Richard Whalley Anthony Curtis, CBE (born 8 November 1956) is a New Zealand-born English screenwriter, music producer, actor and film director, known primarily for romantic comedy films such as Four Weddings and a Funeral, Bridget Jones’s Diary, Notting Hill, Love Actually and The Girl in the Café, as well as the hit sitcoms Blackadder, Mr. Bean and The Vicar of Dibley.
He is also the founder of the British charity Comic Relief.
Curtis was born in Wellington, New Zealand, the son of Glyness S. and Anthony J. Curtis, who was an executive at Unilever.
Curtis and his family lived in several different countries during his childhood, including Sweden and the Philippines.
Part of the family still lives in Sydney.
Curtis has lived in England since he was 11. He began school at Papplewick School, Ascot (as did his younger brother Jamie).
For a short period in the 1970s Curtis lived in Warrington, where he attended Appleton Grammar School, before he won a scholarship to the prestigious Harrow School in London.
He achieved a first-class degree in English Language and Literature at Christ Church, Oxford, and it was at Oxford that he met, and began working with, Rowan Atkinson.