The dim sum of all things 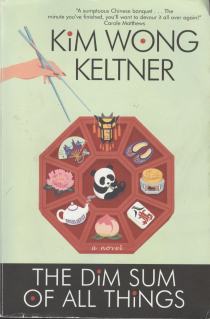 Wong KeltnerÆs spunky novel about a third-generation Chinese-American in San Francisco delivers a left hook to knee-jerk political correctness and offers a comic, honest take on what it feels like to be part of two cultures. Lindsey Owyang is a modern 20-something, underemployed as a receptionist at Vegan Warrior magazine (sheÆs a Įcloset meat-eaterĮ), who unexpectedly finds herself falling Įin likeĮ with Michael Cartier, the magazineÆs white travel editor. But datingÆs tough when you live at home with a traditional Chinese grandmother and even harder when that grandmother is constantly trying to set you up with the children of her mah-jongg partners. Meanwhile, LindsayÆs aunt gets colored contacts (Į ÆDonÆt you think I look at least half-white anyway?Æ Į); a white friend says that Asian girls are stealing all the cute frat boys; and creepy ĮHoarders of All Things AsianĮ accost her on the bus. Lindsey gets a chance to connect with her roots when she finds out that sheÆs expected to accompany her grandmother to China to visit long-lost relatives. Here Lindsey finally gains a grounded sense of her personal and cultural past, while at the same time realizing that as an ABC (American-born Chinese), Įevery experience, even the unpleasant ones, had helped to slowly build her character, creating a one-of-a-kind Chinese American named Lindsey Owyang.Į Wong Keltner is unabashedly sassy and biting in her take on race and love, and the result is both refreshing and smart.