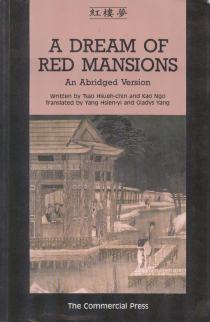 This book is like Anna Karenina in the following ways: Both are masterpieces of epic proportions.
Both are considered contenders for being the greatest works of fiction in their respective languages.
Both deal with large, upper class families and the lifestyle and intrigue involved.
Both are works of realism and paint a complete picture of a society.
A Dream of Red Mansions focuses on the love between Baoyu, an unusual child in his early teens who is temperamental and spends most of his time with the girls in the family mansion and Daiyu, a delicate, sensitive and yet witty and extremely clever girl.
The two grow up as children and live in the same mansion but the family does not hurry to marry them off as they have other plans for Baoyu.

This is the main thread that runs through the novel’s amazing 120 chapters.
The other sublots are very numerous - there are hundreds - but none of them are sustained for the whole book.
The main part of the book is the set of characters.
Again there are hundreds but a few main ones which become the most interesting in this drama.
There’s the conniving Xifeng, Baoyu’s strict father, Baoyu’s assertive ˝other love˝ Baochai and the like.

Unlike Anna Karenina, this book is full of humour, jokes and poems (which was where I think the translation failed the most as Chinese poetry rendered into English seems to lose the plot!).
It contains moments of great sadness but also wit and quirkiness.

There’s been controversy with the amazon reviews of this particular translation.
I don’t speak Chinese so can’t judge it but reading the text, it seemed fine.
I guess if I saw another or the original it would change my mind but this one isn’t too bad.

The novel deals with so many topics that you really get an overview of what life in 18th century upper class urban China was about.
It is VERY long but it’s amazing how in relating heaps and heaps of seemingly trivial incidents you grow to love many of the characters.
It’s like most novels are like meeting someone and hence only seeing what they want to show while this novel is like living with them.
And trivialities aside, it’s very moving.

A must for all interested in Chinese society or who don’t mind persevering through 1200 pages to read a one of the world’s unusual and amazing dynasty chronicles and love stories.