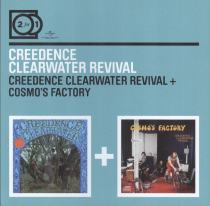 Creedence Clearwater Revival:
Released in the summer of 1968 - a year after the summer of love, but still in the thick of the Age of Aquarius - Creedence Clearwater Revival’s self-titled debut album was gloriously out-of-step with the times, teeming with John Fogerty’s Americana fascinations.
While many of Fogerty’s obsessions and CCR’s signatures are in place - weird blues (˝I Put a Spell on You˝), Stax R&B (Wilson Pickett’s ˝Ninety-Nine and a Half˝), rockabilly (˝Susie Q˝), winding instrumental interplay, the swamp sound, and songs for ˝The Working Man˝ - the band was still finding their way.
Out of all their records (discounting Mardi Gras), this is the one that sounds the most like its era, thanks to the wordless vocal harmonies toward the end of ˝Susie Q,˝ the backward guitars on ˝Gloomy,˝ and the directionless, awkward jamming that concludes ˝Walking on the Water.˝ Still, the band’s sound is vibrant, with gutsy arrangements that borrow equally from Sun, Stax, and the swamp.
Fogerty’s songwriting is a little tentative.
Not for nothing were two of the three singles pulled from the album covers (Dale Hawkins’ ˝Susie Q,˝ Screamin’ Jay Hawkins’ ˝I Put a Spell on You˝) -- he wasn’t an accomplished tunesmith yet.
Though ˝The Working Man˝ isn’t bad, the true exception is that third single, ˝Porterville,˝ an exceptional song with great hooks, an underlying sense of menace, and the first inkling of the working-class rage that fueled such landmarks as ˝Fortunate Son.˝ It’s the song that points the way to the breakthrough of Bayou Country, but the rest of the album shouldn’t be dismissed, because judged simply against the rock & roll of its time, it rises above its peers.
-------------------------------
Cosmo’s Factory:
is the fifth studio album by American rock band Creedence Clearwater Revival, released by Fantasy Records in July 1970 and released as Fantasy 8402, the same month as the single release of ˝Lookin’ out My Back Door˝ b/w ˝Long As I Can See the Light˝ (see 1970 in music).

The name of the album comes from the room where the band rehearsed early in their career.
Bandleader John Fogerty was so insistent on practicing (nearly every day)-and the atmosphere was often so smoky from the other members’ cigarettes—that drummer Doug ˝Cosmo˝ Clifford began referring to the place as ˝the factory˝.

Early pressings of the album contain a three-second dropout on the left stereo channel during ˝Before You Accuse Me˝ and an earlier mix of ˝Travelin’ Band˝ with John Fogerty’s first solo mixed behind the horn section.
This mix was restored on the 40th anniversary reissue.
In 2003, Rolling Stone Magazine ranked Cosmo’s Factory 265 on its list of 500 Greatest Albums.

I Put A Spell On You

Ninety-Nine And A Half

Walk On The Water

Before You Accuse Me

Ninety-Nine And A Half

Before You Accuse Me

Lookin’ Out My Back Door

Run Through The Jungle

Up Around The Bend

My Baby Left Me

I Heard It Through The Grapevine

Long As I Can See The Light

Up Around The Bend

Born On The Bayou