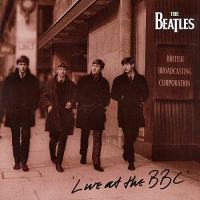 LIVE AT THE BBC is a 2-CD set containing 69 live tracks, all of which are previously unreleased. Also included is a 48-page booklet with track-by-track annotations and essays by Derek Taylor and Kevin Howlett. The Beatles: John Lennon, Paul McCartney, George Harrison, Ringo Starr. Producers include: Bryant Marriott, Bernie Andrews, Terry Henebery, Ian Grant, Ron Belchier. Compilation producer: George Martin. Recorded live between 1962 and 1965. Includes liner notes by Derek Taylor & Kevin Howlett. Digitally remastered by George Martin. LIVE AT THE BBC was nominated for a 1996 Grammy Award for Best Historical Album. Although the guitars are often electric, LIVE AT THE BBC is, essentially, the Beatles Unplugged--yanked out of the recording studio, gathered around a few microphones and encouraged to show off their raw craft, naked voices and rock’n’roll roots. MTV didn’t exist in the early ’60s, but the BBC did, and between March 1962 and June 1965 (a period that spans their first four albums and takes them from the simplicity of ˝Love Me Do˝ to the complexities of ˝Ticket To Ride˝) the Beatles performed 52 times on England’s national radio network. Although they had honed their craft in British and German rock clubs, the Beatles were mostly known as a studio band, and the radio shows served as a sort of behind-the-curtains glimpse of the studio wizards. Most of these performances are covers of early rock, pop and country songs, and the scope of them is wider and deeper than the covers the Beatles put on their albums. There are obvious influences--Chuck Berry, Elvis and Little Richard rockers, and traditional pop ballads--along with lesser-known pop footholds that hint at how/where the Beatles bridged the gap between rock’s teen-age years and its adulthood. They covered soul singer Arthur Alexander only once on their original records (˝Anna˝), but twice here, and the combination of R&B drive and complex pop changes that fuels both ˝Soldier Of Love˝ and ˝A Shot Of Rhythm And Blues˝ gives away one of the primary sources of Beatles style. John Lennon’s vocal on ˝I Just Don’t Understand,˝ an Ann-Margret pop song, foreshadows the downbeat folk-rock with which the Beatles made their mark in the mid-’60s. A baker’s dozen of Lennon/McCartney originals are spread through the set, including one, a jangly folk-rocker titled ˝I’ll Be On My Way,˝ that they never recorded. The John-Paul-George harmonies are in full bloom, as is the Beatlesque sense of humor. There’s one terribly obvious overdub, but the rest of LIVE AT THE BBC sounds like rock’n’roll’s greatest living-room sessions.

I Wanna Be Your Man

Lonesome Tears In My Eyes

So How Come (No One Loves Me)

Everybody’s Trying To Be My Baby

Set Fire to That Lot!

I Forgot To Remember To Forget

I Got To Find My Baby