The lost daughter of happiness 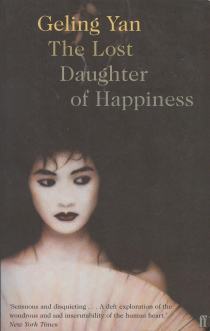 Yan, who fled her native China after the Tiananmen Square massacre, counts herself part of the Įfifth waveĮ of Chinese immigrants to California. In this potentially intriguing but flatly told novel, she tells the story of a Įfirst waveĮ forebear, Chinese prostitute Fusang, who became a celebrity in 1870s San Francisco. Kidnapped from her village in China to be sold as a prostitute in ĮGold Mountain,Į as the Chinese immigrants dubbed San Francisco, Fusang distinguishes herself through her extraordinary serenity, which many take for slow-wittedness. Once in the U. S., she runs afoul of her madams by refusing to hawk herself aggressively to potential customers. Despite FusangÆs reserve, she attracts a slew of devoted lovers, including Chris, a Įlittle white devilĮ who is only 12 when he first purchases FusangÆs services. Chris tails Fusang around San FranciscoÆs Chinatown and follows her adventures over the next four decades. After prompting a bloody battle between two suitors, nearly dying of tuberculosis and being healed by the Christian ladies of the Rescue society, Fusang is stolen by the charismatic Chinese gangster Ah Ding, who changes his name to Da Yong to elude his enemies. The fugitive pair encounter the sordid splendor of Chinatown, witnessing slave auctions and mob riots and enduring attacks by threatened whites. Fusang is a real historical figure about whom little is known; YanÆs account does little to clarify FusangÆs motives. Such opacity creates an intriguing mystery, but lack of resolution frustrates the reader. YanÆs detached, dispassionate tone contributes to the sense of unreality pervading her narrative.