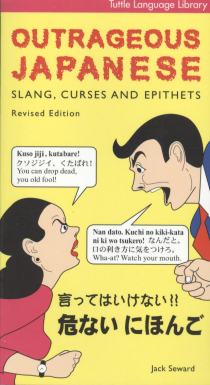 This is probably the most entertaining book youll ever find on Japanese, and its probably the funniest Ive seen on any foreign language so far, and Ive looked at a lot of language books.
The author has over 50 years of experience with Japanese and Japanese culture, including having written over 30 books, and he brings that wealth of experience and a very wry wit and ironic sense of humor to this book. And hes not shy about including some very funny and ribald stories from his younger army days about his first encounters with the seamy side of Japanese culture.

For example, ẄIan-fuẄ means Ẅa girl with no elastic in her drawers.Ẅ This refers to the women who were sent to comfort the men during times of social unrest and war. As Seward says, most of the comforting took place in silence and in the horizontal position. And a Ẅbaka no baitaẄ means an Ẅignorant slut.Ẅ

Besides the above, Japanese has so many words for disparaging someones intelligence that it would be impossible to list them all, but here is a selection from the book:

gubutsu--foolish chucklehead (this reminds me of when I was learning Mandarin Chinese, and I was told that a Ẅtsao-taoẄ was a Ẅstupid, happy personẄ

Then there are a few strange curses:

Snakes and turtles come in for a fair amount of abuse in Japanese for some reason, and the phrase, ẄOmae no yo na dongame wo yatou to wa yume ni mo orawenzo,Ẅ translates as, ẄI would never dream of hiring a dull turtle like you.Ẅ And Ẅdeb-gameẄ translates as Ẅa turtle with buckteeth,Ẅ meaning Ẅa peeping Tom.Ẅ

So overall, a very funny and entertaining book on an aspect of Japanese language and culture that I havent seen addressed by the many other books Ive seen on Japanese.