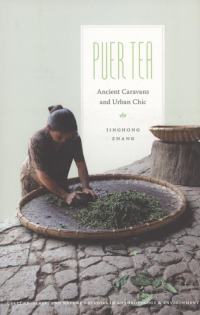 Puer tea has been grown for centuries in the ½Six Great Tea Mountains½ of Yunnan Province, and in imperial China it was a prized commodity, traded to Tibet by horse or mule caravan via the so-called Tea Horse Road and presented as tribute to the emperor in Beijing.
In the 1990s, as the tea’s noble lineage and unique process of aging and fermentation were rediscovered, it achieved cult status both in China and internationally.
The tea became a favorite among urban connoisseurs who analyzed it in language comparable to that used in wine appreciation and paid skyrocketing prices.
In 2007, however, local events and the international economic crisis caused the Puer market to collapse.

Puer Tea traces the rise, climax, and crash of this phenomenon.
With ethnographic attention to the spaces in which Puer tea is harvested, processed, traded, and consumed, anthropologist Jinghong Zhang constructs a vivid account of the transformation of a cottage handicraft into a major industry?with predictable risks and unexpected consequences.