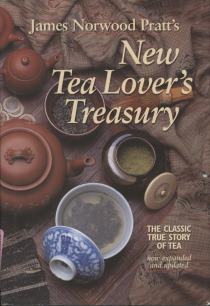 Tea has an interesting story, and Pratt’s good and personable writing really makes it interesting.
The first half of the book outlines the history, perhaps starting as early as 2700 BC.
Hi makes interesting parallels: ˝Just as wine is the Christian sacrament, tea is a Taoist/Buddhist communion˝.
Pratt;’s own personal history started with wine, but switched to tea as effects of regular wine were felt.
He moves from tea in the orient, to ˝east meets west˝, and yes, its true the States got tea before Britain! Pratt’s own relatives participated in patriot tea parties during the revolutionary war (it wasn’t just in Boston).
The British and John Company trading of tea really did shape world history, particularly in India.
The last half of the book lists tea treasures throughout the world, and I am looking forward to trying Chinese ˝Green Spring Spiral’ and Toucha Pu-Er, Pratt also deciphers those confusing initials (TGFOP?) after tea names, and clarify `Orange Pekoe’.
The inclusion of about a dozen full color pictures of tea plantations and harvesting around the world added color.
Tea is the affordable luxury, so brew a cup (following his directions) of Dragonwell and settle into an enlightening read!