In the miso soup 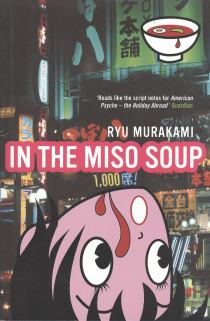 Ryu Murakami has never written about violence, but about the causes of violence - and not direct, ordinary causes, but the underlying psychological tensions in human beings which lead to violence. The psycopath in the novel, Frank, describes violent tendencies in children as the product of anxiety, an attempt to prove that the world will not collapse when some horrible act is perpetrated. ’Anxiety’ is certainly a good term to describe the book, or any of Murakami’s - every scene vibrates with an eerie strangeness, and human relations take unexpected turns. In the end, the product is somewhat mystifying, but provides a good read and ample food for thought. What it does best is pair images of extreme innocence and extreme violence, produce alternate reactions of sympathy and disgust, and force a reader to suspend all kinds of belief and judgement until the page-turner narrative is over. Still, what it isn’t is a thriller, a character study, or a book with any clear message. The character of Frank could be taken to represent many things - the destructive effect of confused intentions on an insular culture, or a human loneliness common to both this American and the Japanese protagonist, or any misfit lashing out against a restrictive society. In any case, it’s one of the most fascinating contemporary novels I’ve discovered.