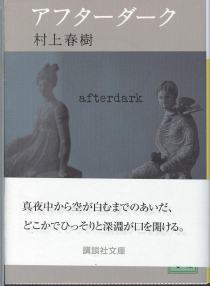 Murakami’s 12th work of fiction is darkly entertaining and more novella than novel.
Taking place over seven hours of a Tokyo night, it intercuts three loosely related stories, linked by Murakami’s signature magical-realist absurd coincidences.
When amateur trombonist and soon-to-be law student Tetsuya Takahashi walks into a late-night Denny’s, he espies Mari Asai, 19, sitting by herself, and proceeds to talk himself back into her acquaintance.
Tetsuya was once interested in plain Mari’s gorgeous older sister, Eri, whom he courted, sort of, two summers previously.
Murakami then cuts to Eri, asleep in what turns out to be some sort of menacing netherworld.
Tetsuya leaves for overnight band practice, but soon a large, 30ish woman, Kaoru, comes into Denny’s asking for Mari: Mari speaks Chinese, and Kaoru needs to speak to the Chinese prostitute who has just been badly beaten up in the nearby ½love hotel½ Kaoru manages. Murakami’s omniscient looks at the lives of the sleeping Eri and the prostitute’s assailant, a salaryman named Shirakawa, are sheer padding, but the probing, wonderfully improvisational dialogues Mari has with Tetsuya, Kaoru and a hotel worker named Korogi sustain the book until the ambiguous, mostly upbeat dénouement.