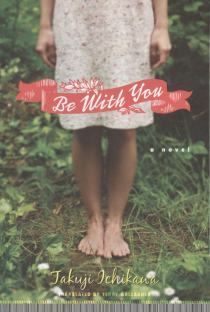 ˝Soon I won’t be with you any longer,˝ says Takumi’s 29-year-old wife Mio, ˝but when the rainy season returns, I will come back to see how the two of you are getting along.˝
Takumi is a troubled young man, struggling to live a normal life with his six-year-old son Yuji after the untimely death of his wife. Along with the emotional and physical distress of losing Mio, Takumi has other serious emotional issues with which to contend: He often forgets things which he knows he shouldn’t, he cannot ride in any vehicle or enter movie theatres lest he be conquered by crushing anxiety, and he simply has no idea how to properly perform various household tasks such as laundry, cooking, or cleaning. After a year has passed since his wife’s death, Takumi and Yuji simply adapt to wearing slightly-stained clothing and eating food which is all but inedible.
And then, during the rainy season, the two happen upon a petite, lost woman in the woods near their walking path - a woman who looks an awful lot like Mio. This woman, however, has no memory. Not of an earlier life, not of Takumi or Yuji, and absolutely nothing of herself. And so, Takumi takes her back into his home to be his wife, and to be Yuji’s mother.
On the surface, the story sounds remarkably droll. The premise, while not by any stretch a new one, does have its own unique set of circumstances. First of all, none of the characters are depicted in a spectacular manner. Takumi with his many problems (which dictate his life), Yuki with his co-dependent relapses into infancy, and Mio with an average (almost plain) body and no memories to speak of (with the merest suggestion of a personality, even) - this all lends come credence to the viability of the tale. Barring one lapse in the reader’s world of what is possible and what isn’t - this could very well be the story of anyone - of any flawed, beautiful person.
Particularly striking about this book is how the story absorbs the reader, all while lacking any customary climax or traditional conflict. Our narrator (Takumi) understands how this story will end, and does not hide it from us throughout the narrative. There are no shocks or jolts, or even questions of what will happen next - all is foretold from the start. It is, in fact, quite a delicately-woven story, as hauntingly beautiful and as spectral as the reappearance of Mio herself. It is slow and deliberate and perfect.
Simply stated, this is a grown-up autobiographical version of My Neighbor Totoro which has taken on many forms in its native Japan: a cinematic movie, a television series, and a Manga (recently adapted for English-speaking audiences by VIZ Media as well). Structurally, this novel does tend to take awkward page-breaks (often in the middle of a conversation), and closing quotes before a character has finished talking (leading to some mild confusion as to who is speaking). Due to its consistency, this cannot be attributed to the odd typographical error, but a deliberate spacing. However, for a book of this value, these minor transgressions can be overlooked without too much difficulty.
Overall, a wonderful effort - a book well worth reading on a rainy weekend in the spring.