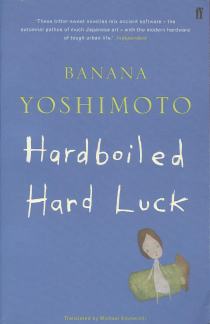 Like twins whose paths diverge dramatically, these two gentle stories share little beyond the mesmerizing voice of their creator.
The surreal subject matter and dreamy narration of ˝Hardboiled˝ make it read rather like a bedtime story gone awry.
When the young female narrator realizes that it’s the anniversary of her lover’s death, several curious events suddenly make sense: a stone from a creepy shrine that finds its way into her pocket; a fire at an udon shop where she’d just been eating; and a nighttime visitation by the ghost of a woman who committed suicide.
˝Harboiled˝ drags a bit, but ˝Hard Luck˝ is a pleasure, even if it’s almost as downbeat as its predecessor.
This time, a young female narrator is standing watch over her older sister, Kuni, whose brain is slowly dying after a cerebral hemorrhage.
As their parents gradually lose hope for Kuni’s recovery, the narrator makes her own peace by forging a bond with her sister’s fiancé’s brother.
In this gemlike story, Yoshimoto (Goodbye Tsugumi) takes a subtle, graceful look at the relationship between the sisters and the fault lines in this grieving family, elevating her little book from fine to downright moving.