Chrysanthemums and thorns [the untold story of modern Japan] 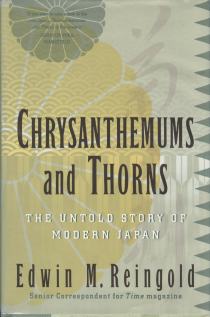 In these superb essays, Reingold (coauthor of Made in Japan ) debunks myths and stereotypes about the ˝inscrutable˝ Japanese. His disciplined, detailed reporting, rooted in his years as Time magazine’s Tokyo bureau chief, steers clear of sociobabble and corrects many common misperceptions. For example: less than 20% of Japanese workers have true lifelong employment; although early education is grueling, once in college many students can and do coast; long office hours are common, but there’s more goldbricking than meets the eye; workers have company unions, but they do conduct successful strikes; even in this male-dominated society, 13% of the seats in Tokyo’s Metropolitan Assembly are held by women, and sexual harassment cases are prosecuted and won. The popular view of the Japanese as imitators, he argues, undervalues the creative mechanisms involved in successful adaptations. Reingold’s gift for clarity and detail provides useful instruction in Japan’s labyrinthine power complexes, with their inducements for graft and vice, and in its stressed financial and political structures. Sections on sexuality and family life offer fresh insights; so do tidbits about the life and death of Emperor Hirohito, his son and their hold on the increasingly comprehensible nation that emerges in these pages. Photos.