Women of the pleasure quarters [the secret history of the geisha] 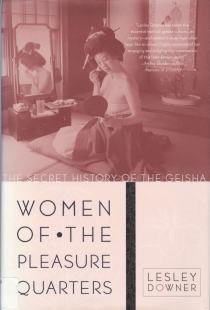 Inspired by Arthur GoldenÆs massively popular Memoirs of a Geisha to Įmeet the real geishaĮ in the last stronghold of geisha training in Japan, Downer skillfully intertwines her profiles of Kyoto personalities and tea-house customs with a fluidly written geisha history thatÆs unabashedly aimed at a Western audience. Author of On the Narrow Road and The Brothers: The Hidden World of JapanÆs Richest Family, Downer was no stranger to the country. However, she found the entrance to the Įgeisha worldĮ heavily guarded. She writes: ĮI was always an outsider, I could never step through the looking glass.Į But small successes (finding the right cakes to present to Įthe mama,Į a very powerful geisha) and patience eventually won Downer a place at events that are Įutterly closed to outsiders.Į These included an invitation to a young girlÆs misedashi (Įstore openingĮ), the Įrite of passageĮ from trainee to geisha. We also learn, for example, of the distinction that has developed between a prostitute and a geisha (which translates as Įarts personĮ), who undergoes intense and lengthy apprenticeships in dance and music. Written in dynamic, highly readable prose, the book is supported by exhaustive research and a lengthy bibliography. Readers who were as smitten with GoldenÆs geisha as Downer was will find this good companion reading. Photos.