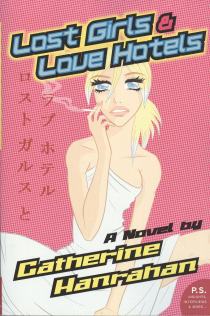 Margaret, a 20-something Canadian, has fled to Tokyo to escape her past and now instructs aspiring stewardesses in ˝cabin-crew and airline interview English.˝ By night, she numbs herself with drink and dangerous sex. Her story, as readers learn in alternating chapters, features an imploding family and a dangerously schizophrenic brother. Though Margaret is less than convincing as a narrator, her surreal Tokyo encounters propel the book: a barkeep who communicates with lines from Beatles songs, speakers in public bathrooms that broadcast flushing sounds, a rent-a-dog park, a Western slacker who gigs as a fake wedding minister. And, of course, the automated love hotels that Margaret frequents with a Japanese gangster. The plot lurches forward—Margaret becomes fixated on a missing Western girl, gets fired and hooks up with a man whose name she never learns before her roommate flees. There’s redemption to be gained, but the fractured narrative feels like a string of bizarre moments.