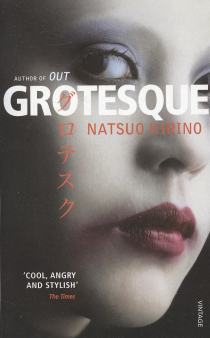 Natsuo Kirinos second novel to be translated into English confirms her as one of the elite novelists who are moving contemporary Japanese fiction into the American consciousness. Banana Yoshimoto and Haruki Murakami have led the charge, Yoshimoto with her odd, artless portraits of young people, and Murakami surveying the surreal with devastating, deadpan insight. In Grotesque, Kirino continues to stake out the territory she claimed in Out: the edges of the human psyche that darken toward horror.
Kirinos subjects are women and murder. Two women in their late 30s have been killed in similar fashion within a year of each other: Yuriko, a prostitute, and Kazue, a successful professional who was turning tricks on the side. They are linked by a nameless woman, older sister of the former and classmate of the latter, who lays out their histories and her own in a chillingly dispassionate, curiously defensive narrative.

Yuriko and her sister are daughters of a Japanese mother and a Swiss father. In Yurikos case this has resulted in an Ẅalmost godlikeẄ beauty. At the exclusive girls school they attend, Yuriko rises effortlessly on looks alone, while awkward Kazue sweats for high marks and remains pathetically unaware of her permanent unpopularity. The narrator, neither beautiful nor brilliant, watches her sister and her friend and hones her Ẅuncompromising ability to feel spite.Ẅ

Born into a world of rigid hierarchies and enrolled in a school that makes these unspoken boundaries painfully plain, the girls come of age in an environment that Darwin would have recognized immediately. Images of evolution, adaptation and mutation are everywhere. The narrator classifies the various student species with scientific precision and dreams of a Ẅvery simple worldẄ where Ẅeverything engages in a survival of the fittest and all living creatures exist just to procreate.Ẅ

But emotion does not obey Darwinian rules. It mutates, and monsters are born, people Ẅwith something twisted inside, something that grows and grows until it looms all out of proportion.Ẅ In a society that values conformity, Yurikos beauty is too perfect, Kazues cravings for success too obvious. As these young women mature, their excesses exile them from Japanese society -- and they find themselves suddenly free. This is the terrible paradox at the center of Kirinos work: In Japan, to be a monster, a grotesque, can be a kind of liberation. watches the trial of their accused murderer unfold, the narrators malice turns into a kind of envy of the dead women, who in their sexual freedom flouted the society that rejected them. Grotesque is a powerful indictment of that society, its narrators spirit Ẅpainted with hatred, dyed with bitterness.Ẅ Kirinos women speak from beneath the lacquered surfaces of traditional Japan, in voices that need to be heard.