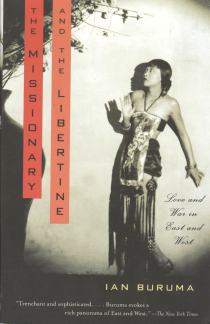 This collection of essays, drawn mainly from The New York Review of Books, will appeal to readers interested in the Far East, especially Japan. Ian Buruma writes of Europe’s very particular fascination with Asia, and makes clear that this is what attracted him, too:
Neither puritanism nor sensuality was ever unique to East or West, yet, on the whole, it is for the latter that Westerners have looked East. There has been a sensual, even erotic, element in encounters--imaginary or real--between East and West since the ancient Greeks. The European idea of the Orient as female, voluptuous, decadent, amoral--in short, as dangerously seductive--long predates the European empires in India and Southeast Asia.
Yet an unexpected reversal has upset this mode of thought. ˝From the official point of view of China, Singapore, Malaysia, South Korea, and Japan,˝ writes Buruma, ˝Europe and the United States are now models not of masculine vim but, on the contrary, of decadence, libertinism, and sloth.˝
The best essay in The Missionary and the Libertine builds off this observation by examining Lee Kuan Yew’s repressive Singapore and the ˝Asian values˝ debate. Startling anecdotes spring from the page (in this selection as well as the others), such as the employment ad Buruma shares from a Singapore daily: ˝Filipino. Hardworking. No day off.˝ Buruma is more than just an observer; he’s also an analyst. The very concept of ˝Asian values˝ rings untrue, he believes, because the phrase ˝only really makes sense in English. In Chinese, Malay, or Hindi, it would sound odd. Chinese think of themselves as Chinese, and Indians as Indians (or Tamils, or Punjabs). Asia, as a cultural concept, is an official invention to bridge vastly different ethnic populations living in former British colonies.˝ Buruma also writes about Pakistan’s Benazir Bhutto, the Philippines’ Cory Aquino, V.S. Naipaul, the Seoul Olympics, the debate over the bomb in Japan, and so on. The book is a grab bag of literature and culture, and fans of Buruma will be delighted to have it all packed together in a single volume.