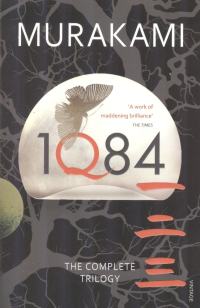 1Q84 (One Q Eighty-Four or ichi-kew-hachi-yon is a novel by Haruki Murakami, first published in three volumes in Japan in 2009–10.
The novel quickly became a sensation, with its first printing selling out the day it was released, and reaching sales of one million within a month.
The English language edition of all three volumes, with the first two volumes translated by Jay Rubin and the third by Philip Gabriel, was released in North America and the United Kingdom on October 25,011.
An excerpt from the novel, ˝Town of Cats˝, appeared in the September 5, 2011 issue of The New Yorker magazine.
The first chapter of 1Q84 has also been read as an excerpt at Selected Shorts.

The events of 1Q84 take place in Tokyo during a fictionalized 1984, with the first volume set between April and June, the second between July and September, and the third between October and December.

The book opens with Aomame as she catches a taxi in Tokyo on her way to a work assignment, noticing Janáček’s Sinfonietta playing on the radio.
When the taxi gets stuck in a traffic jam, the driver suggests that she get out of the car and climb down an emergency escape in order to make her important meeting, though he warns her that doing so might change the very nature of reality.
Aomame makes her way to a hotel in Shibuya, where she poses as a hotel attendant to kill a hotel guest.
She performs the murder with a tool that leaves almost no trace on its victim, leading investigators to conclude that he died a natural death from a heart failure.

Aomame starts to have bizarre experiences, noticing new details about the world that are subtly different.
For example, she notices that the Tokyo policemen are carrying semiautomatic pistols now, and she always remembered them carrying revolvers.
...