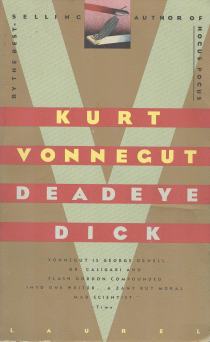 The novel’s main character, Rudy Waltz, nicknamed Deadeye Dick,[1] commits accidental manslaughter as a child (he kills a pregnant woman who was vacuuming) and lives his whole life feeling guilty and seeking forgiveness for it.
He was so traumatized by the events directly after the woman’s death that he lives life as an asexual ˝neuter,˝ neither homosexual nor heterosexual.
He tells the story of his life as a middle-aged man expatriate in Haiti, which symbolizes New York City, until the end, when the stream of time of the story catches up with him.
At this point, he confronts an event that has been suggested and referred to throughout the novel.
The generic Midwestern town of Midland City, Ohio (also the setting of Breakfast of Champions) in which Rudy was raised is virtually destroyed by a neutron bomb.
At the ending of the book, it appears that Rudy, while he may not have fully come to terms with his actions, has at least come to live with them.
In addition, the ending is where Vonnegut provides his most direct commentary on society, although there are hints here and there throughout the novel.

Another key theme throughout the book is the relationship between Waltz and his parents.
Vonnegut focuses on connecting the actions and attitudes of parents to the ensuing actions and attitudes of the offspring, in this case, Rudy Waltz.
Rudy writes a play, based on events in the life of his father’s former best friend.
In the latter half of the book some scenes are described as theater scripts.