The fourth treasure : [a novel] 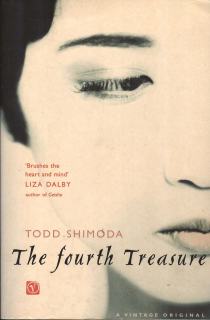 A teacher of Japanese shodo (calligraphy) emerges from a stroke with both agraphia and aphasia, severely limiting his ability to communicate and rendering his kanji characters indecipherable.
Meanwhile, across San Francisco, his former mistress, Hanako, waitresses at a Japanese restaurant and struggles to hide her MS from her daughter, Tina, a grad student in neuroscience and the love child of her affair with the calligrapher.
Calligraphy serves as a meta-metaphor throughout this book, which, much like a calligraphic kanji symbol, is deliberately composed stroke by stroke.
Skipping back and forth in time, from 17th-century Japan to modern northern California, Shimoda (365 Views of Mt. Fuji) traces the history of the potent Daizen Inkstone, from its discovery in a mountain stream to its hiding place in present-day Berkeley.
Like a poem composed in kanji symbols, the story’s overall meaning only emerges from the interplay between its characters, who are themselves invested with symbolic, conflicting qualities.
They include the rebellious shodo sensei Zenzen and his traditionally minded student Gozen; Hanako and her thoroughly American daughter, Tina; two neuroscience professors, one a theorist, the other a pragmatist; and Tina’s boyfriends, one a charismatic, charitable Latino doctor and the other a humorless Caucasian.
When Tina takes the stroke-afflicted Zenzen as a subject for her studies, she is, quite literally, attempting to resolve the ancient mind-body conflict.
Illustrations of the sensei’s poststroke calligraphy and its Zen koan-like interpretations punctuate important points in the narrative.
Reading this novel, which encompasses so many mysterious contrasts, is like an exercise in contemplating a beautiful piece of calligraphy; Shimoda has penned a skillful meditation on both art and life.