A time for tea [women, labor, and post/colonial politics on an Indian plantation] 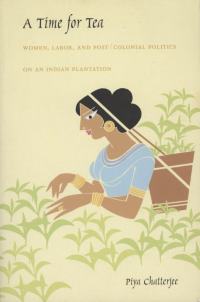 Time for Tea: Women, Labor and Post-colonial Politics on an Indian Plantation (2011) is a post-colonial feminist ethnographic critique of labour practices in Indian tea plantations.
Through personal interviews, anecdotes and a play, Piya Chatterjee examines the role gender, class, and race play in the production, consumption and circulation of tea.
Transcending the realm of local politics and culture, the ethnography reveals the multilayered, multispatial, colonial dimension of gendered labour.
She begins by deconstructing the image of the tea box itself to showcase how the image of the exotic tea-plucking women distracts the consumer from the harsh working conditions of plantations.
By providing a historical account of the tea industry in India, Chatterjee reveals the intricate link between colonialism and the gendered division of labour in North Bengalese plantations.
While gender is her main unit of analysis, Chatterjee explores the way in which colonialism has shaped and continues to shape, the patriarchal and class-based nature of plantations.
Coming from a Global South perspective, she demonstrates the intersectionality of gender, class and race, as mutually constitutive mechanisms of oppression.
Throughout the novel, she acknowledges her own privilege as a Global South academic and highlights the difficulties of speaking for the subaltern.