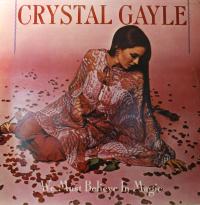 ˝We Must Believe In Magic˝ was originally released in mid 1977, & commercially, it was a breakthrough album for Crystal--it peaked at #12 on the Billboard charts & was certified platinum within a year of its original release, largely thanks to the huge, million-selling hit ˝Don’t It Make My Brown Eyes Blue˝. The album really did deserve the success, because most of the album is great, displaying Crystal at her best--as ever, her vocals are consistently sumptuous, & although she didn’t write anything here, her expressiveness is one-of-a-kind & she consistently comes up with just the right treatment to get maximum impact from each track--in other words, she very much makes the songs her own. The aforementioned ˝Don’t It Make My Brown Eyes Blue˝ opens the album--it’s somewhat jazz-flavored and it’s wonderfully breezy with an irresistible rolling piano part, and it’s melancholy, yet not depressing--as good as it is, don’t let its commercial success fool you... Not only are there a bunch of other great songs here, but the album is also impressively varied--there’s the amusingly dramatic ˝River Road˝, the stomping bluesy rocker ˝Green Door˝, the wistful ballad ˝Make A Dream Come True˝, the somewhat frantic Cole Porter cover ˝It’s All Right With Me˝, the stately, otherworld-ish title track with hypnotic wordless vocals from Crystal, & the punchy, somewhat sneering ˝All I Wanna Do In Life˝, all of which are gems. As much credit as Crystal herself deserves, you also can’t deny the excellent job by producer Allen Reynolds--there’s lots of neat stuff going on like the clanking percussion, flutes, & phasing on ˝All I Wanna Do In Life˝, the cool orchestration on ˝Make A Dream Come True˝, a combination of fiddle and biting guitar on ˝It’s All Right With Me˝, & Moog synthesizer (and god knows what else) on the title track. The weakest track is the somewhat ho-hum ballad ˝Going Down Slow˝, but it’s still got the cool interplay of the phased guitar line & the orchestration. I have a complaint with this album, & it’s the same complaint I have with so many of Crystal’s albums--it’s too darn short!! Clocking in right around half an hour, it really cries out for a couple more songs. Yes, I’d rather have half an hour of great material than 15 minutes of great material & 25 minutes of dreck--I’m not denying the consistent high quality of this album, but it is on the short side. Still though, this is a highly recommended album. Plus, the album sleeve with the checker-board style of the photograph of Crystal with her increasingly ultra-long hair is smile-inducing.

I Wanna Come Back To You

It’s All Right With Me

All I Wanna Do In Life