Last Of The Breed 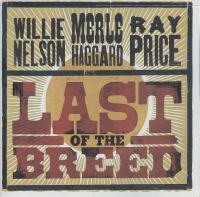 The title Last of the Breed speaks with a defiance that, for the most part, the music on this album does not, and thatÆs just as it should be -- while Willie Nelson, Merle Haggard, and Ray Price are indeed among the last functioning practitioners of pure, unadulterated Western swing, honky tonk, or countrypolitan blues in the classic manner, on this album they seem less concerned with fighting the changing face of country music than with playing this music with the easy confidence and quiet conviction thatÆs been the hallmark of their respective careers. For the most part, Last of the Breed finds these three friends and occasional collaborators working through a set of old-school country classics (Haggard is the only member of the trio to bring any original material to the sessions, and delivers one of the albumÆs best performances on his new song ĮIf I Ever Get LuckyĮ), and they treat chestnuts like ĮHeartaches by the Number,Į ĮI Love You Because,Į ĮThat Silver Haired Daddy of Mine,Į and ĮPick Me Up on Your Way DownĮ with both strength and familiarity -- these guys could probably sing these numbers in their sleep after all these years, but they also approach them like pros, realizing these old standards gained their status as classics because they endure and people love them, and they give them the respect and care that they deserve. Haggard is in fine voice on this set, and Nelson sounds good though his phrasing occasionally lags behind the melodies a shade more than is comfortable. As for Price, time has added a slight wobble to his instrument, once one of the most impressive in country music, but he still projects a dignity and commendable emotional warmth, and when he joins voices with his pals Willie and Merle, itÆs a stirring reminder of just how much these artists still have to offer. Legendary producer Fred Foster supervised these sessions, with a band of seasoned Nashville veterans backing the singers (and the Jordanaires adding harmonies on several numbers), and at its best Last of the Breed really sounds the way these things did in the old days, and Nelson, Haggard, and Price achieve something more than nostalgia -- they offer a stirring reminder of the strength of this music when country music spoke to something deeper than just a marketing demographic. ~ Mark Deming, All Music Guide

My LifeÆs Been A Pleasure

Heartaches By The Number

I Love You A Thousand Ways

I Gotta Have My Baby Back

If I Ever Get Lucky

Pick Me Up On Your Way Down

I Love You Because

I Love You So Much It Hurts

That Silver Haired Daddy Of Mine

IÆll Keep On Loving You