American IV : The Man Comes Around 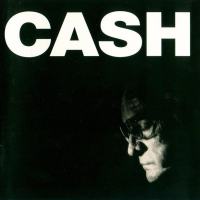 I am the least capable person to review this album. This man had been writing and singing songs for forty years and all I’d heard of him was ˝Ring Of Fire˝. I knew the song. I did not know who sang it. It was all but another one of these inevitable songs on every compilation, and one of these songs every channel my parents loved so much would play. I never noticed. Today, I still know hardly more.
One late-summer evening as I was zapping through the music channels here in The Netherlands, my thumb froze over the remote. On the screen singing was, not the usual parade of lewd, crafted, playbacking little mouths seemingly right of production lines, not good capable singers only better than the rest because of management and advertisement skills; it was a man dressed in black, looking old as death, with a voice raw as a crow’s. I did not know it was he, if it had mattered. It was Cash, singing ˝Hurt˝. I looked, listened but then more. It was so unspeakably sad, so unfathomably melancholic. How can I describe the emotions hearing that song? Haunted and moved don’t seem adequate.
Enchantment. I was a youth with a passion for music: metal, symphonic, classic, techno. Give it to me, give it to me every day, all day long. I’ll be satisfied. I was a youth, looking at an old man, singing for me, singing of his life and emotions. Music moves me always, but it was this music, barely more than a voice and an acoustic guitar, that drew a tear, dropped into my heart - then another and another. Silent, invisible tears filling hollows, and all that showed on the outside, were a sniff of the nose and a blink of the eyes. I was a youth.
Many of the songs on this final album, including ˝Hurt˝, are covers, even though some are his own. Cash here also covers Paul Simon, Hank Williams and John Lennon. Not all of his arrangements are better than the originals. Technically. But Cash performs with such feeling, such sway, such voice, that this is the most cherished music I’ve bought in a lifetime.
Then, as I sat there oblivious, and wishing I had seen the whole thing, the clip ended and I saw Cash’s name. I turned off the set, stood, and hoped I would hear it again. Weeks later, Cash was dead. Today, I still know hardly more.
Five stars to this album

The Man comes around

Give my love to Rose

I Hung my Head

First Time ever I saw your Fac

I’m so lonesome I could cry