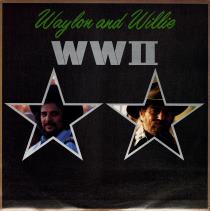 WWII is a duet album by Waylon Jennings and Willie Nelson, released on RCA Victor in 1982.

By 1982, the outlaw country movement was past its peak but Jennings and Nelson, the movement’s primary artists, remained two of country music’s biggest superstars.
Jennings had scored nine Top 5 solo albums in a row, with five going to #1, between 1974 and 1982.
Nelson was also enjoying his commercial prime, with his 1982 album Always on My Mind not only topping the Billboard country albums chart but also peaking at #2 on the pop albums chart.
By the early 1980s, Nelson’s appeal had transcended country music; his affable personae, as well as his increasing presence in films, had made him a crossover star.
Jennings, who was struggling to rebuild his finances and in the throes of a crippling cocaine addiction, had seen his most recent album Black on Black receive lukewarm reviews, even though it had been produced by Chips Moman, who had also produced Nelson’s Always on My Mind.

Jennings and Nelson had enjoyed some of their greatest success together.
The 1976 compilation Wanted! The Outlaws became the first million selling country album and their 1978 album Waylon and Willie, released at the height of the outlaw country movement, produced the chart-topping hit ˝Mammas Don’t Let Your Babies Grow Up to Be Cowboys.˝ By all accounts, Jennings and Nelson were kindred spirits and close friends, but their egos did clash occasionally; in his memoir Willie Nelson, biographer Joe Nick Patoski quotes Nelson’s ex-wife Connie: ˝They had such a mutual respect for each other and their music, it was like a brother bond, literally.
There was always a little bit of - not jealousy - but Willie would make him [Jennings] feel inferior in some ways, and I think it was because of the cocaine.˝ Asleep at the Wheel pianist Floyd Domino, who played with Jennings’ band in 1983, also noticed the tension between the two legends, telling Patoski, ˝You could tell Waylon was bothered by Willie’s success, although he said he didn’t care.
He’d tell audiences, ’I don’t care if I’m not number one.
I’ll be number two.’ The crowd didn’t even know what he was talking about.
I saw Willie on some cooking show on TV and the host said Waylon was mad at him.
Willie laughed and said, ’What’s he mad about today?’ Waylon cared.
Willie didn’t.˝

(Sittin on) the Dock of the Bay

The Year That Clanton Delaney Died

May I borrow Some Sugar from You

Write Your Own Song