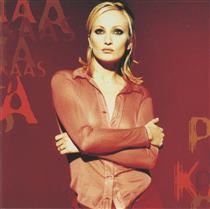 Dans ma chair (Eng (approx.): In My Flesh) is an album recorded by the French singer Patricia Kaas.
It was released in 1997 and achieved success in many countries.

After the success of the previous studio album, Je te dis vous, Kaas decided to released a new album in 1997, which was entitled Dans ma chair.
The album marked the second collaboration with the French songwriter and singer Jean-Jacques Goldman who had already written her 1993 hit single ˝Il me dit que je suis belle˝.
To date, Kaas continues to be associated with Goldman for the composing of her songs, and this collaboration remains one of the most important of the singer’s career.
The album was recorded in New York, but also in Paris, and produced by the singer and Phil Ramone, who had previously worked with artists such as Ray Charles, Billy Joel and Paul Simon.

The album was also composed by several famous contributors : for example, the American songwriter and singer Lyle Lovett, with the song ˝Chanson simple˝ (Eng: ˝Simple song˝), and James Taylor with ˝Don’t Let Me Be Lonely Tonight˝ (the song, the last track, is performed as a duet).
French artists participated in the writing of the album, such as Didier Barbelivien, who had also worked with Kaas for her previous studio album, and Zazie.
Philippe Bergman, who co-wrote three songs of this album, was Kaas’ boyfriend at the time.

In France, two singles were released from this album : ˝Quand j’ai peur de tout˝ (Eng: ˝When I’m afraid of everything˝) in February 1997, which reached #11 and achieved Silver status, and ˝Je voudrais la connaître˝ (Eng: ˝I Want to Know Her˝) in July 1997, which peaked at #20.
The first single, ˝Quand j’ai peur de tout˝, was written by Diane Warren and was successfully covered in English-language in 2003 by the pop band Sugababes, but the song was re-entitled ˝Too Lost in You˝.

Don’t Let Me Be Lonely Tonight