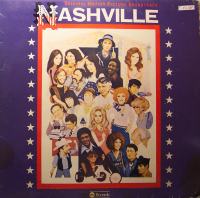 Nashville is a 1975 American musical black comedy film directed by Robert Altman.
A winner of many awards, selected for preservation in the United States National Film Registry, Nashville is generally considered to be one of Altman’s most accomplished films.

The film takes a snapshot of people involved in the country music and gospel music businesses in Nashville, Tennessee.
It has 24 main characters, an hour of musical numbers, and multiple storylines.
The characters’ efforts to succeed or hold on to their success are interwoven with the efforts of a political operative and a local businessman to stage a concert rally before the state’s presidential primary for a populist outsider running for president of the United States on the Replacement Party ticket.
In the film’s final half-hour, most of the characters come together at the outdoor concert at the Parthenon in Nashville.

Tapedeck In His Tracktor 1975

Carradine Keith and B. Haris