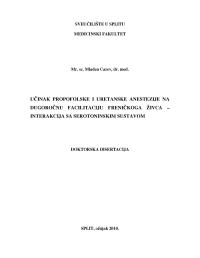 SUMMARY
i.e. no pLTF was induced.
There was a significant increase of PNA (59.4 ± 6.6%, P<0,001) in urethane-anesthetized group at T60, i.e. pLTF was observed. During the first hypoxic episode,PNA was significantly increased in both urethane-and propofol-anesthetized rats (172.3 ± 15.8% in the group U vs 106.8 ± 16.9 % in the group P, P<0.001). HVR in either group of animals was preserved during all five (TH1–TH5) hypoxic episodes (P<0.001 compared with baseline phrenic nerve activity).
Also, the acute HVR was greater in urethane-anesthetized compared with propofol-anesthetized animals (P<0.001). AIH did not elicit significant changes in f, Ti, Te, and Ttot in either group at T15, T30, and T60.
During the second part of the study, intravenous administration of 8-OHDPAT failed to increase PNA in 40 per cent of the propofol-anesthetized animals.
Conclusions: We confirmed the hypothesis that the magnitude of pLTF was influenced by the specific anesthetic used.
The pLTF was observed in urethane-anesthetized rats 60 min after the last hypoxia and was expressed mainly as amplitude, and not frequency pLTF.
On the contrary, pLTF was abolished in the propofol-anesthetized rats.
We might speculate about combined effects of propofol on synaptic plasticity, interaction with 5-HT receptors in the control of breathing (inconsistent increase of PNA after intravenous 8-OHDPAT), as well as about indirect effects through quantitative or qualitative alterations in HVR.
These findings could have clinical implications, especially in patients dependent on respiratory plasticity, i.e. patients suffering from obstructive sleep apnea and respiratory insufficiency either following spinal cord injury or during neurodegenerative diseases and undergoing propofol anesthesia.