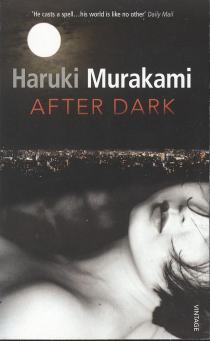 Haruki Murakami’s twelfth novel is ˝a short, sleek novel of encounters set it Tokyo during the witching hours between midnight and dawn.˝ It is set in a seven-hour period of real-time. The reader follows a skeletal outline of the interactions between six lost souls. We meet 19-year-old Mari, studying late at night in a Denny’s and her sister, Eri, a beautiful model in a semi-comatose state, being watched by someone evil. Other alienated souls of the night include a former fighting champion working at a love hotel, a prostitute, a jazz musician, and a sadistic office worker.

Murakami is an author known for his mysterious characters and minimalism. With this book, however, he was too minimalist, leaving far too much up to the reader for not just interpretation, but invention of a story line. He doesn’t provide the reader any conclusions, which is his trademark, but with this book, he has released a lot of story threads, loosely wound together, without the true structure of a novel.

At least it was short and sleek, so it wasn’t terribly painful to finish. As a reader, I was left wanting more, left wondering too much about the dream-like nighttime landscape of these characters. The story around the sleeping sister is ostensibly the most eerie, with hints of something terrible that drew her into social withdrawal, but the lack of action or reason behind her coma renders those chapters listless and sluggish.

After Dark was originally released in Japan in 2004, and had Russian, Dutch, Chinese, and French translations before it was released in English in May 2007.