Liang and Lin [partners in exploring Chinas architectural past] 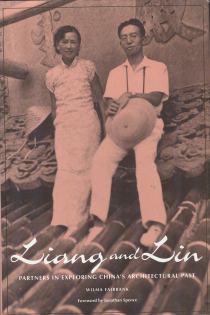 Wilma Fairbank documents, from both a historical and a uniquely personal perspective, the professional and personal achievements of Lin Whei-yin and Liang Sicheng.
Liang and Lin were born in early twentieth-century China, a time when the influences of modernism were slowly bearing down on the traditional culture.
In the 1920s, they traveled together to the Beaux Arts universe of Philadelphia, where they both graduated with honors from the architecture department of the University of Pennsylvania.
Married in 1928, they returned to their native land and became the first two professors at the newly founded school of architecture in Shenyangs Tung Pei University.

Wilma Fairbank and her husband, John King Fairbank, Harvard Universitys eminent historian of modern China, were lifelong friends of Liang and Lin.
This relationship allows the author, herself a noted researcher of art and architecture, to paint a vivid picture of the couple within the context of Chinas turbulent past.
Fairbank recounts how Liang and Lin used their Western training to initiate the study of Chinas architectural evolution.
She also documentsas seen through the eyes of Liang and Linthe tragic events that ravaged the Chinese homeland and its people: the 1937 invasion and bombings by the Japanese military and the ensuing illness and poverty; World War II and the civil war; the rise to power of the Communist government in 1949; and the victimization of the scholar class during the Cultural Revolution of 1966-76.