All she was worth 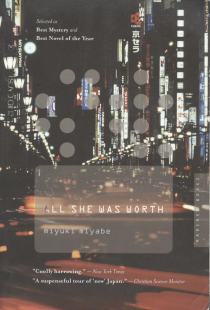 The horror in this beautifully fashioned tale of stolen identity lies not in the cold-blooded crimes but in the motive?a desperate hunger for consumer goods. Shunsuke Honma, a widowed 43-year-old Tokyo police inspector with a 10-year-old son, is on disability leave. The boring cycle of idleness punctuated by painful physical therapy sessions comes to a halt when a nephew asks for Honma’s help in finding his missing fiancee, whom he knows as Shoko Sekine. As Honma’s search intensifies, he realizes the fiancee had actually assumed Sekine’s identity and possibly killed her. For the American reader, the jewel in this enormously compelling novel is the portrait of working- and middle-class Japanese getting caught in a cycle of astronomical personal debt in order to enjoy the good life. Also eye-opening is Japan’s elaborate registry system for keeping track of its citizenry. In order to become Shoko Sekine, the impostor had to perpetrate an ingeniously elaborate series of hoaxes and lies. Honma is tenacious, methodical, an attentive listener with a retentive memory and the ability to connect disparate bits of information. The trail takes him back through the real Sekine’s history and into the life of the other woman, whose family ran afoul of vicious loan sharks. Miyabe drives her complex plot with spare prose, combining expert pacing and psychological nuance to ultimately haunting effect. (Feb.) FYI: All She Was worth was named Best Novel of the year and Best Mystery for 1992 in Japan.